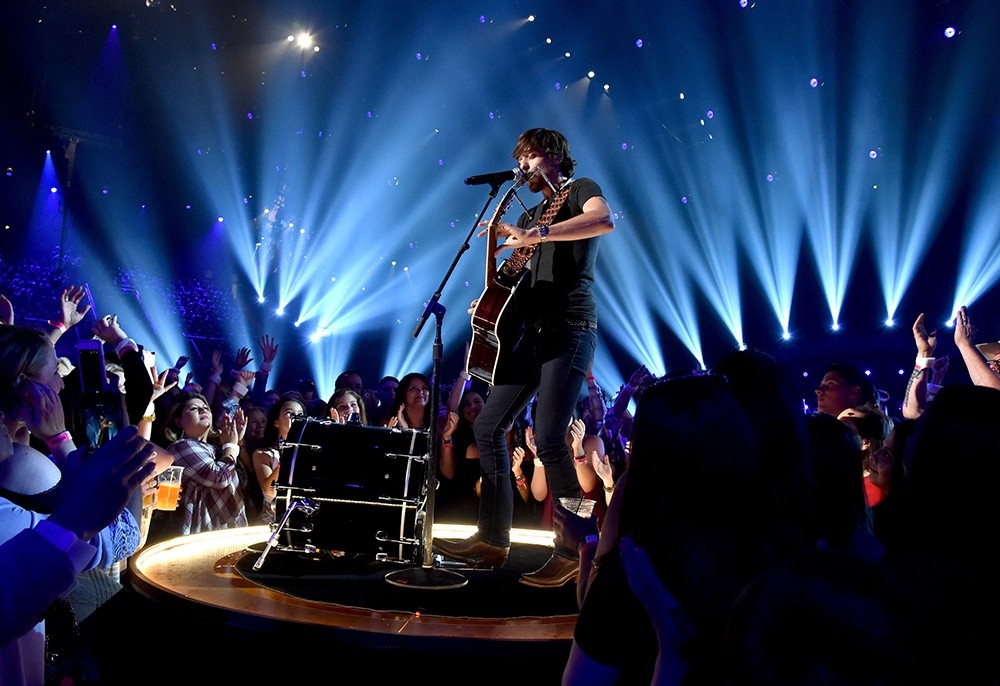 "We did everything we were asked to do," says Gordy Schroeder, but notes the audience rushed the stage during the country artist's June 27 set.

Photos and videos of country artist Chris Janson playing a concert Saturday night at Gordy’s Hwy 30 Music Fest in Filer, Idaho, caused a stir on social media after it appeared fans were not social distancing or wearing masks. But Gordy Schroeder, the festival’s organizer and namesake, says the three-day event took all legally required precautions.

Working with state and local authorities to ensure COVID-19 pandemic safety guidelines were observed during the festival -- one of the first to take place since the country shut down in mid-March -- Schroeder says all attendees were instructed to use hand sanitizer as they entered and were provided with free face masks and gloves (neither of which are mandatory in Flier). There were also hand sanitizer stations set up throughout the Twin Falls fairgrounds.

Between acts, the stage and all equipment were disinfected “from head to toe,” Schroeder says, and the front rail separating the audience and the stage was wiped down. There were a number of medical personnel on hand available to take attendees’ temperatures or advise if they began to feel ill.

Idaho entered stage 4 of its reopening plan on June 13, allowing public gatherings of more than 50 people with appropriate physical distancing and precautionary measures observed. The state has seen growing rates of COVID-19 over the past two weeks and as of Monday was reporting 5,752 confirmed and probable cases.

Though Schroeder says social distancing was stressed to festival goers, “When Chris Janson got on, [the audience] came forward,” he says. “They came up and he put on one hell of a performance.”

As the audience collected toward the front of the stage, seeing as it was the festival's third day, Schroeder says he figured attendees knew the safety guidelines by now and made their own choices with that knowledge. “How I kind of see it, and I hate to be this way, people were allowed to protest and riot. And we saw where supposedly that doesn't cause a bump [in COVID-19 cases]," he says. "These people weren't rioting. They weren't being bad. All they were doing was enjoying music and wanting to live... They were enjoying themselves and loving on one another and enjoying music. And if it's not OK to do that, but it's okay to riot and it's okay to protest everything, then I went and fought for this country for the wrong reasons, I guess.”

Janson posted video on his social media shot from the back of the stage showing fans crowded up against the railing with no social distancing and few wearing masks, but took the video down on Sunday.

“Until he posted [the video on social media], everything had been no negativity. Everybody’s thanking us,” Schroeder says. “I actually had a couple of gals after the Chris Janson show talk to me across the fence and they wanted to thank me so much and this one little girl said, ‘I’m not gonna lie. I’ve been locked up in my home with all these rules and regulations.’ She says, ‘I was to the point where I was almost suicidal and getting out and being able to enjoy some music and seeing people and some music and live again, I needed this.’”

This past weekend’s festival was the 10th overall and the seventh held at the fairgrounds. While Janson was the biggest name, other acts among the nearly two dozen acts included Ray Wylie Hubbard and Jack Ingram.

Schroeder says he was in near constant contact with the performers' teams making sure all members were healthy and this even led to a handful of artists pulling off the bill, including Shane Smith & The Saints after they had someone in their camp test positive with COVID-19. Friday’s headliner, Koe Wetzel, had a member feel ill as they were on the bus headed into Flier and even though the member wasn’t tested for COVID-19 Schroeder and the act decided to pull the plug on their set out of an abundance of caution.

Capacity on the grounds is around 5,000, but Schroeder says it was capped at around 2,500 per day to give people room to spread out. Additionally, Schroeder says they expanded the grounds and put up grandstands where attendees -- especially families -- could sit while socially distancing.

Still, Schroeder says he is concerned some attendees might end up sick. “It bothers me. I’m not gonna lie. I don’t want anybody to get sick. I know we did everything we were asked to do,” he says.

When Billboard asked for a comment from Janson, Janson's label, Warner Music Nashville replied, "Chris was one of two dozen performers to fulfill a contractual obligation after being told that last weekend’s event would adhere to all safety and social distancing protocols, as has been confirmed by the festival in its statement below: 'The Hwy 30 Music Fest in Filer, ID, assured all performers and concert attendees they were safe and following all local guidelines.'"

About the author: Melinda Newman Contributor