How AC/DC Recharged For Its New Album ‘Power Up’ 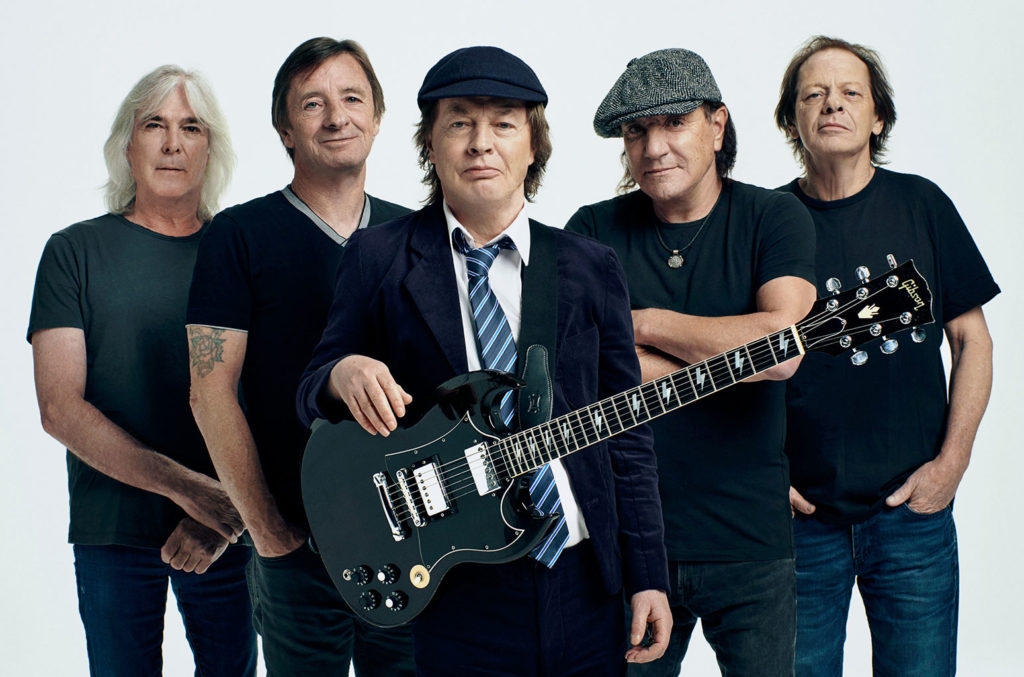 After multiple setbacks — including the loss of co-founder Malcolm Young — AC/DC prepares to release its 17th studio album.
AC/DC’s 2015-2016 Rock or Bust tour was a bumpy one. Rhythm guitarist Malcolm Young had left the group to get treatment for dementia (he died in 2017) and was replaced by his nephew, Stevie Young, while drummer Phil Rudd was serving a home-detention sentence for methamphetamine possession and threatening to kill a former staff member. Before the trek finished, vocalist Brian Johnson left because of hearing problems (he was replaced for the last 22 shows by Axl Rose), and bassist Cliff Williams had announced his retirement.

That left lead guitarist (and Malcolm’s younger brother) Angus Young alone with “a lot of demos and ideas” he had recorded over the years with Malcolm in the latter’s home studio. “The two of us would get together and work so when one project was done, we were ready for the next one,” says Angus. Once he had sorted through enough material, he reached out to his former bandmates, and by August 2018 they were all together at The Warehouse Studio in Vancouver. Angus believes the reunion was inevitable: “I suppose [you] think, ‘Yes, we’re all going to hook up again at some point.’ ”

The resulting album, Power Up, produced by Brendan O’Brien (Pearl Jam, Bruce Springsteen), is out Nov. 13 on Columbia Records. Angus and Malcolm wrote the 12 songs for the project years ago, mostly as they planned the 2008 release Black Ice, but it’s not as though AC/DC has changed much over the years. Since forming in Sydney in 1973, the group has built simple but memorable songs out of hard-rock guitar riffs that boast enduring grooves, accompanied by lyrics about sex, rock and anger that might be considered single-entendres.

“Some people would say, ‘Well, you have a very juvenile approach to what you’re singing,’ ” says Angus. “But good rock’n’roll is juvenile in a sense.”

There’s a method to this madness, in other words — even the schoolboy outfit Angus wears during concerts. Normally, “Angus is quiet as a church mouse,” says Johnson. “And then it’s like watching Clark Kent going into the telephone kiosk; it’s like a magic suit.” It works: AC/DC is the ninth-best-selling act in the United States of all time, as ranked by the RIAA — for instance, 1980’s Back in Black has been certified 25-times platinum, according to Columbia. The band didn’t even make its music available on iTunes until 2012, and it still relies heavily on CD and vinyl sales. 2014’s Rock or Bust sold 627,000 equivalent albums, according to Nielsen Music/MRC Data — 483,000 of which were physical.

To promote Power Up, AC/DC scored a major Dodge ad campaign synch for its lead single, “Shot in the Dark,” as well as a variety of professional-sports placements, from Major League Baseball and WWE Friday Night SmackDown to an NFL Network Artist takeover that includes in-game coverage and an interview on Good Morning Football. “Even in a business focused on streaming,” says Columbia co-head of marketing Jay Schumer, “you want to do a lot of the same things: make the band’s presence felt, make the fans feel connected.”

About the author: Robert Levine Contributor